The new 2.1 release of the SmartCard-HSM is a minor release, adding two important new features: Controlled secure messaging binding of the authentication state and key agreement with authenticated public keys. 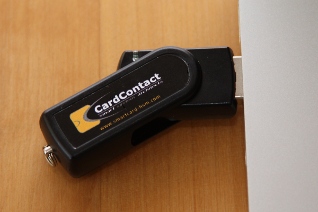 As the secure channel keys can be not shared between the local and remote system, the local application will either continue using plain APDUs or create a new secure channel. In either case, the plain APDU would reset the authentication state.

The second new feature is an EC Diffie-Hellman based key agreement scheme with authenticated public keys. This feature allows to establish a set of symmetric keys at the end-points of a communication channel. It allows a hybrid scheme, in which card verifiable certificates are used for key management.

Only if authenticity of the peers public key can be validated, then the public key is used to derive a shared key with a selected private key. The shared secret is then post-processed using a HMAC-256 based extraction-then-expansion key derivation as defined in NIST SP800-56C. A set of keys can be derived by specifying different key derivation parameter for each key.

The identity of the peer can be either derived from the unique identifier of the SmartCard-HSM or by introducing a new extension in the Device Authentication Certificate.