Building a SmartCard-HSM cluster is a very cost-effective way to increase cryptographic processing power. The ability to securely migrate keys from one SmartCard-HSM to another allows adding devices as the demand increases.

A great device to implement a cluster of SmartCard-HSMs is the myUTN-80 Dongleserver from SEH. The Dongleserver is a networked USB hub, available with 8 or 20 ports. It can be used as a desktop device or mounted in a 19-inch rack. The myUTN-80 supports a range of client operating systems and is in particular useful to give your virtual machines access to a SmartCard-HSM. 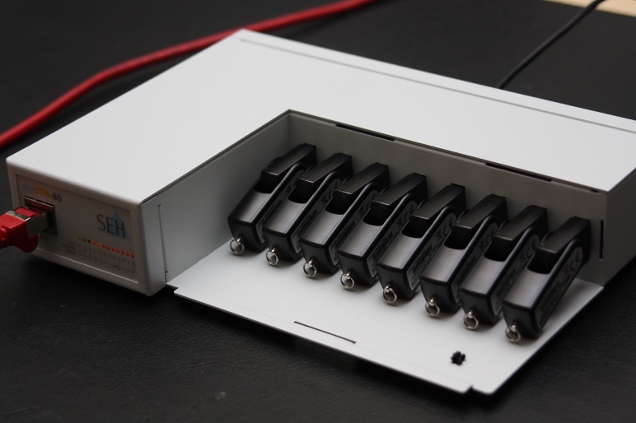 To find out how well cryptographic processing scales in a cluster, we equipped a myUTN-80 with 8 SmartCard-HSM EA+ token. The tokens were initialized with an ECC and RSA test key and then cloned using the KeyManager from the SDK. For the test we used the multi-threading tests from the sc-hsm-embedded PKCS#11 module.

Using the utnm command line tools, you can list the devices inserted into the Dongleserver.

which connects the device in port 1 to the local machine. The PC/SC daemon detects the new device and makes it available to the application.

In a burn-in test, the 8 SmartCard-HSMs were put under load for 1.000.000 RSA signatures with 2048 bit keys. The test took 23 hours and completed without a single failure.

The average throughput was 12 signatures per second.

Further tests were conducted with RSA and ECC keys in different configurations.

Generally there is a linear performance increase by adding SmartCard-HSMs to the cluster, at least up to the tested configuration of 8 SmartCard-HSMs. Small differences are caused by performance variations in the token itself, which is caused by the external clock applied to the secure element.

Network connectivity with the myUTN-80 was very stable during the tests and the device performed perfectly.